First nations collections held within the Special collections contain strong connections to the local first nations groups within the Hunter Valley. The records have ties with local groups, the Awabakal, Worimi, Darkinjung and Wonnarua nations, and further connections to other nations across Australia. One example is a unique collection of weapons from the estate of the late Percy Haslam, a scholar and admirer of Aboriginal cultures. 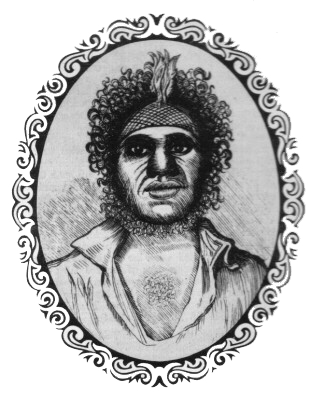 Aboriginal languages and dreaming stories of the Hunter remain despite the consequences of colonialism. In just the last 200 years, after thousands of years of habitation, the last speakers of the original languages of the region had been indoctrinated into the policies of the Nations and forced to give up their traditional cultural practices, language and land.

Much of what we do know can be attributed to the work of two individuals, a leader of the Awabakal clan, Biraban (or M'Gill), pictured left, and the missionary Lancelot Edward Threlkeld, who created an Aboriginal mission on the banks of Lake Macquarie in 1826. Threlkeld compiled a grammar and vocabulary of the Awabakal dialect. As part of his missionary instruction, and with the help of Biraban as his tutor, he questioned the Awabakal people about their language, beliefs and witnessed some of their rituals, recording dreaming stories, important places, as well as ritualistic practices. Threlkeld's correspondence and papers were edited by Niel Gunson in Australian Reminiscences and Papers of L.E. Threlkeld: Missionary to the Aborigines 1824 - 1859. Canberra, A.C.T.: Australian Institute of Aboriginal Studies, 1974. Threlkeld's published works on the Awabakal language that were originally published as pamphlets were brought together and edited by John Fraser in 1892 under the title An Australian Language as spoken by the Awabakal the people of Awaba and Lake Macquarie (Near Newcastle, New South Wales) being an account of their Language, Traditions, and Customs. Sydney: Charles Potter, Government Printer, 1892.

Since that period, this region has seen a number of individuals who have sought to safeguard and record local Aboriginal knowledge. Two figures that are represented in our archives are Canon Carlos Stretch and Percy Haslam, who both actively acquired knowledge of Aboriginal languages and culture.

Our Virtual Sourcebook of Aboriginal Studies in the Hunter Region contains scanned and digitised accounts from historical sources.

Further information relating to local Aboriginal Dreaming, history and culture can be obtained by visiting the Wollotuka Institute.