This Collection comprises some 600 or so books donated to the Library by Professor Kelver Hartley, foundation Professor of French. Professor Hartley also made a major bequest to the University of more than $1,000,000 to enable students studying French language and literature to visit France. Please see below for Emeritus Professor K. R. Dutton's Introduction to the Hartley Collection and Catalogue compiled by Ms Elizabeth Guilford. 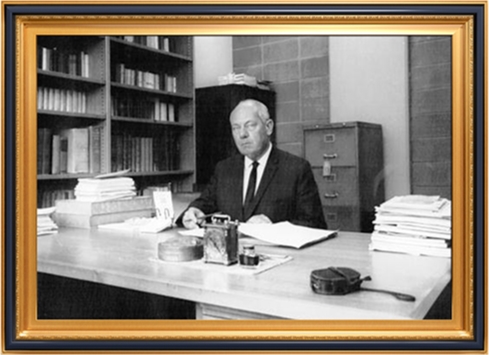 Kelver Hayward Hartley (1909-1988) was Foundation Professor of French in the University of Newcastle, holding the Chair from 1965 until his retirement at the beginning of 1969.

Born in Wayville, South Australia, Kelver Hartley moved with his family to Sydney during his childhood and was educated at Sydney Boys' High School, from where he matriculated to the University of Sydney. Here he took his B.A. degree with a major in French during the professoriate of the celebrated G.G. Nicholson, who was to have a major influence upon his ideas. Rather than take out a Bachelor's degree with Honours, Hartley chose to study for the Master of Arts degree by examination, achieving such outstanding results that he was awarded the French Government Travelling Scholarship to enable him to pursue doctoral studies in Paris.

His doctoral research was carried out under the supervision of the eminent Fernand Baldensperger, the "father of comparatism", who suggested to him a thesis concerning the French influence on the work of Oscar Wilde. The thesis, which was subsequently published, remains an important and original study of an aspect of Wilde often overlooked by Anglo-Saxon critics.

His research in Paris had been made possible by his being granted leave of absence from the New South Wales teaching service. Upon his return to Australia, no university positions being available, he continued to teach in high schools in various parts of the State, being one of the very few secondary teachers to hold a doctorate.

Over more than twenty years of secondary teaching (1935-1955), Kelver Hartley rose to the position of subject master, teaching at Sydney Boys' High, Newcastle Boys' High, Armidale High and Sydney Technical High among other schools. Although reserved and apparently rather distant in his relations with colleagues, he was a popular teacher, his harmless eccentricities and love of his subject endearing him to successive generations of pupils.

During Hartley's tenure, the College and its successor the University produced some outstanding French students and attracted some remarkable members of staff to the French Department : a number of these went on to distinguished academic careers including Chairs of French in Australia and overseas. Hartley's own research in the field of comparative literature was maintained at a high level of productivity, and he became recognised as Australia's leading expert in comparative Franco-Italian and Franco-Spanish literary studies.

After his retirement, the University conferred upon him the title of Emeritus Professor, the first such title to be granted by the autonomous University of Newcastle. He settled in Sydney, first at Edgecliff and then in Glebe. At the time of his move to Glebe in 1983, he donated to the Auchmuty Library that part of his valuable book collection which he had not already given it upon his retirement.

During the final years of his life, he lived as a pauper, having acquired a substantial portfolio of shares which gradually grew in value and which he intended to leave as a gift to the University of Newcastle upon his death, aimed at providing the opportunity for recent graduates in French to travel to France in order to continue their studies there.

Although the value of the shares was diminished by the 1987 stock market crash, shortly after his death in February 1988 it had risen again to over the $1 million he had set as his goal. The University believed that his wishes could be better met by extending the beneficiaries of his will beyond the 'recent graduates' he envisaged so as to include undergraduates as well; the need to seek a variation in his will meant an extensive delay while the matter was heard in court, but the outcome was favourable to the University and the delay in reaching it meant that the value of his legacy had risen to almost $2 million by the time of the court's judgment.

The Hartley Bequest Program has been established by the University to give effect to Professor Hartley's wishes as expressed in his will. Apart from overseeing the substantial scholarship scheme, the Program has undertaken publication of a Kelver Hartley memorial volume and of the unpublished novel, Remus Leaping, which Professor Hartley wrote in the 1970s. It has also contributed towards the restoration and maintenance of the Hartley Collection held in the Auchmuty Library.

The University of Newcastle is indeed fortunate to be the recipient of such a substantial benefaction. Apart from the scholarship scheme, the bequest of books made to the Library by Professor Hartley has added to its collection a number of rare and valuable volumes, including first editions and limited-number editions bound in morocco, vellum and other leathers. Amongst many volumes of great interest and value, one might mention in particular the 4th edition (1752) of Buffon's Histoire naturelle, bound in the original 18th century vellum, and a signed and numbered 20-volume edition (1921-27) of the works of Joseph Conrad. There are a number of other volumes listed in the catalogue which are not to be found in any other Australian library.

The Hartley Collection and the Hartley Bequest Program are fitting memorials to a man who lived for the life of the mind, and the University of Newcastle can be both proud and grateful to have counted Kelver Hartley as a member of its community of scholars.