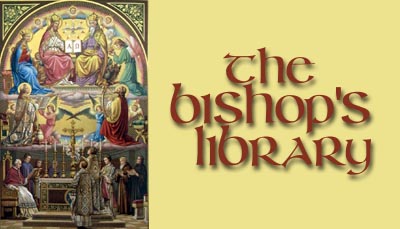 An inventory of the Collection is available as a PDF file. 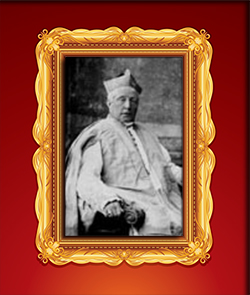 James Murray was born in 1828 in County Wicklow, Ireland. His uncle, Daniel Murray, was Archbishop of Dublin and took charge of James' education. At 16, he was sent to Rome and studied at the Urban University, from which he received a Doctorate of Divinity in 1851. His dissertation was on the authority of the Roman Pontiff - perhaps a predictable subject at that time when revolutionary activity throughout Europe fired Catholics with an enthusiastic support of the Papacy. During his time in Rome, Murray became a protege of one of Rome's more influential churchmen, the Rector of the Propaganda Fide College, Paul Cullen. Pope Pius IX personally appointed Cullen to the Primatial Irish See of Armagh in 1849, but he was transferred to the See of Dublin in 1852. His arrival there coincided with the return from Rome of the newly-ordained Father James Murray and Cullen appointed him as his private secretary. Murray's early success in Rome, coupled with the almost universal influence of Cullen, assisted in his appointment to the See of Maitland in 1865.

Maitland had been established as a Diocese in 1847, but its first bishop, English-Benedictine Charles Davis, received special permission to assist the Archbishop of Sydney (Polding) as co-adjutor, rather than to reside in his See of Maitland. Davis died in 1854, just when Rome was considering expanding the territory of the Diocese of Maitland and regularizing its status. The See remained vacant until James Murray's appointment. After consecration in Dublin in November, 1865, Murray travelled to Rome where, with some adroitness, he negotiated an agreement with the Archbishop of Sydney and the Congregation for the Propagation of the Faith over the expansion of the territory of the diocese.

The Diocese of Maitland in 1866, was very far removed in every possible respect from Dublin and Rome. Murray's role was that of a missionary and for at least twenty years his office required him to be travelling almost constantly, by train and by horse, to the far reaches of his diocese which extended to the Queensland border. He was a zealous pastor, teaching and encouraging his flock. He caused to be brought to the Diocese Religious sisters, priests and brothers of various Congregations to assist him in the care of souls and in Catholic education. Murray was greatly loved by the people of the Diocese, but perhaps less so by his clergy, by whom he was perceived more as a disciplinarian than a father. 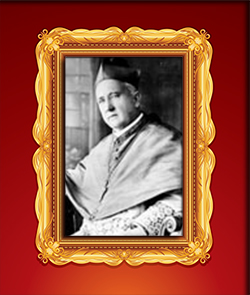 As Cullen had his favourites, so did James Murray and chief among them was Patrick Vincent Dwyer. Dwyer, born in 1858 in Albury, was the son of an Irish-emigrant schoolmaster. Teaching originally in Albury, then in Bathurst, Dwyer senior and his family moved to Maitland in 1867. Inheriting his father's talents, even at an early age Patrick Vincent Dwyer was teaching. This was how James Murray met him, as a boy who identified himself as "Vincy" teaching Catechism in East Maitland. Murray encouraged Dwyer senior to have his son well-educated and took the boy under his wing. "Vincy" commenced higher education at St. Stanislaus' College, Bathurst and thereafter Murray arranged for him to go to Dublin. Like Murray, Dwyer went on from Dublin to Rome also studying at the Urban University. Dwyer was ordained to the priesthood in Rome in 1882 thereupon immediately returning to Australia.

James Murray immediately appointed Dwyer as his Secretary and as Diocesan Inspector of Schools. Having demonstrated his ability and intellectual capability in these capacities, Dwyer was appointed as a coadjutor-bishop in 1897 (in accordance with Murray's wishes) and from then until Murray's death in 1909, the two bishops, with a great deal of mutual understanding, jointly guided the activities of the diocese.

Whereas Murray, having to accomplish much in a relatively short space of time simply to establish the Diocese, built and went into debt with perhaps little caution, Dwyer's reign as Bishop (1909-1931) might best be seen as a prudent continuation and consolidation of Murray's achievements. But whereas Murray had been particularly active in church politics throughout Australia and beyond, Dwyer's mentality and interests lay elsewhere. He was never loved the way the people loved Murray and if he might be viewed as remote, perhaps this should be understood as an essential detachment from worldly affairs. He was a man of tremendous refinement and ability, but essentially more an educator than a pastor. 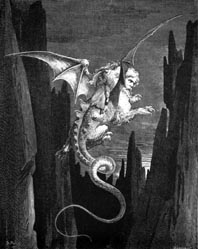 The collection of books these two bishops developed (independently one from the other) very much reflects the paths of their education and their similar interests. The Bishop's Library contains those works which one would expect to find amongst the collection of a well-educated nineteenth century bishop: the important works of the notable theologians Thomas Aquinas, Robert Bellarmine, Alphonsus Ligouri; commentaries on the Sacred Scripture (for instance that of Cornelius Lapide); the writings of Cardinal Newman; well-known collections of sermons by famous apologists like Bourdaloue, as well as sundry devotional and spiritual works of the eighteenth, nineteenth and twentieth century. There are also numerous reports of the proceedings of various Diocesan Synods and Councils of the Church, which were used as a guide to ecclesiastical law at a diocesan level in those days before Church law was codified (1917). There are many volumes pertaining to the history of the Church (one of Murray's interests) and the history of Ireland. Complementing this are a number of studies on Irish culture. 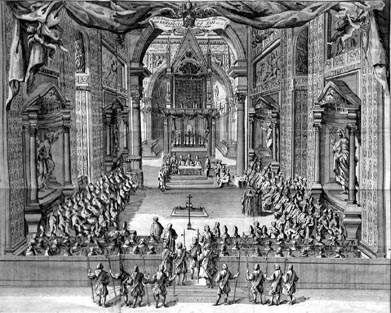 Printed Proceedings of the Council of Rome, 1725
This rare engraving shows one of the sessions of the
Council held in the Basilica of S' John Lateran

Both bishops had a strong interest in contemporary affairs and throughout the collection there are works discussing the prominent issues of the day, political, social and ecclesiastical. Whereas Murray concentrated his attentions on keeping abreast of developments in ecclesiastical law, Irish affairs and Church history, Dwyer, especially through his subscriptions to journals, continued to immerse himself in biblical scholarship, Catholic social teaching etc. 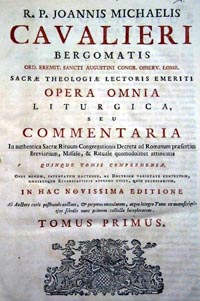 There are a great many volumes on Sacred Liturgy (ceremonial books and commentaries), many of which are bound and illustrated quite lavishly. One particularly handsome three-volumed set of the Pontificale Romanum (containing the prayers and rites performed by bishops) is replete with fascinating woodcuts depicting the ceremonies as they were performed in 18th century Rome. 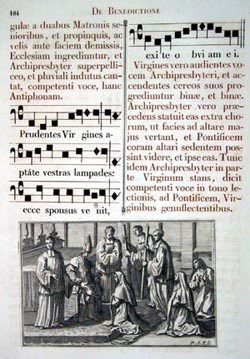 Although the collection has suffered various depradations over the years, it has also been augmented by the collections of succeeding bishops and priests. Father Bernard McKiernan, who died in 1927 whilst resident at the Bishop's House, left his collection of books to the Diocese, some of which forms part of The Bishop's Library. Father McKiernan was a very cultured and scholarly man, with interests ranging from patristics to anthropology, to the East to liturgy.

Furthermore, by some undetermined means, an extensive collection of eighteenth century editions of the works of classical Roman historians and poets, as well as a multi-volumed French encyclopaedia of biography, owned by William A. Duncan, has become part of The Bishop's Library. Duncan, a Scot, was a convert from Presbyterianism and came to Australia in 1837 precisely because of the enlightened approach of the New South Wales Colonial Government to religious liberty and education. Initially Duncan was a teacher at Maitland, before moving to Sydney in 1839 to edit the colony's first Catholic newspaper, The Australasian Chronicle. Duncan was a man of broad vision, great learning and not inconsiderable literary ability.

These various influences combine together to make The Bishop's Library a collection of great importance. The significance of it lies in part in the rarity of its volumes, in part in their subject matter and in part in the on-going analysis of what such works, gradually built into one collection, indicate about the collectors. For the University of Newcastle, the acquisition of The Bishop's Library is a tremendous enrichment to our research resources, and even more so because it complements so admirably The Morpeth Collection, established by the first Anglican Bishop of Newcastle, William Tyrrell. Both of these Collections have been presented to the University in commemoration of the respective sesqui-centenaries of the Catholic and Anglican Dioceses, which happened to be established on the same day, 25th June, 1847. Consequently, perhaps it is of more than passing interest that Patrick Vincent Dwyer had amongst his books the biography of the pioneering Anglican bishop, William Tyrrell.