A Collection of works relating to chess and medieval science. The information and photographs that follow concerning Brian Tomson are courtesy of Bob Meadley.

The Late Brian Tomson - A Reminiscence 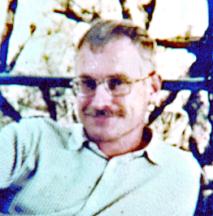 It was nice to meet you if but briefly and I promised you some biographical information on John Brian Tomson to complement his rather fine chess book collection held by the University.

I enclose a copy of the University newsletter item on his passing and will just add that he was born 22nd June 1942 and at his death his mother lived in Belfast and there was a brother.

Of my near 12 years of correspondence with him (I still have all his letters) I can only say that I still miss them for their wit and chess content. Brian was primarily a chess player and a very strong one. Later he became a chess problemist and was world class by his late 30's. He published a very unusual book of seven copies called "Fifty Chess Problems" in December 1983 as a Christmas present to his friends. I got one and I noticed another in his own collection in your library.

Our correspondence centred around chess history, chess books and problems. We rarely discussed the great players except in a historical sense. Brian was quick to realise I was not a strong player and steered the letters in a more equitable direction. After his death I came into ownership of a lot of letters that were written to others and found what a genuine all-round correspondent he was. For example with someone named Terence he composed this poem:

The myths of the Scyths, with perhapses and ifs,
Are well-trodden paths, but on dangerous cliffs
For amateur sailors in frailest of Schiffs,
These Scyths were devoted to bashings and biffs
And left all their victims with the status of stiffs,
In short, I'd soon meet with wild hippogriffs
Ah, Terence! flirt not with those terrible Scyths!

I thought for a time that the last word in the fourth line should be "skiffs". "Schiffs" is a very well known chess problem term used by the top composers to discuss the Schiffman theme.

Whilst we were in your city last week I discovered the enclosed which is as close as I can get to sending you a photograph of Brian. Thankyou again for permitting us to browse his library. He was a great loss to the world and one of my best chess friends.