The Auchmuty Library's first and greatest benefactor was Miss Reta Light (1898 - 1989), who upon her death in September 1989 left the Auchmuty Library a staggering $1.5 million. The Light Memorial Trust was formed to administer the endowment. According to her will, the money was to be used to purchase books, periodicals, microfilms and musical scores. From 1991 to 1999 the Trust financed $597,172 worth of acquisitions including a fine collection of Australian poetry , rare first editions of works by James Joyce and Thomas Hardy and impressive editions of Le Corbusier and titles related to the history of theatre.

Reta Light was born on the 15th March 1898 in the family home at Cowper Street Carrington. She was the youngest daughter of Morris and Sarah Light. Morris Light was a well respected businessman and public figure, the founder of the furniture store known as the "House of Lights" and later M. Light & Son, as well as alderman on both the Carrington and Newcastle Councils. He was Mayor of Newcastle from 1924-25 and is credited for having set in motion the self-funding construction of the Newcastle City Hall and Civic Theatre. Reta was described as talented, shy, self-indulgent yet generous, strong willed and eccentric.She loved to travel, spoke fluent French, and divided her time between France and Australia. During the second world war, whilst in Paris, she was imprisoned by the Nazis, and sent to a concentration camp, while her sister Hilda had fortunately escaped and was protected by nuns. Upon her return, she put her share of the fortune into a range of investments, indulging her passions for fur and opals. She was an accomplished musician, and often gave recitals on the grand piano at the David Jones cafeteria in Sydney. She had a reputation for travelling in grand style, booking out two state rooms on board the ship, one for herself, another for her luggage, (which usually required a lorry to get her to the dock) and the remainder in the hold. She never married, had no children, and lived alone. In her latter years living in Manly, she would often take the ferry into the city, visit her suppliers of gems and furs, and then drop in at David Jones for some coffee and a recital. She would also often travel to Newcastle to visit the family crypt at Sandgate. In 1980 she suffered a massive stroke, and never spoke or walked again, spending her final years in the Austral House nursing home in Manly. She died in September 1989 aged 91 and lies buried in the family crypt at Sandgate. Her gift to the Library took all by surprise, and reinforced the notion that she held Newcastle and its University in high regard for the good fortune that this town and its people had bestowed upon her family.

Reta Light's father, Morris Light was born in Kovno, Western Russia in 1859, but left there in 1879 escaping the persecution of the Jews that was gaining momentum during the period. Russia at the time was largely a medieval country, where the worlds of church and state were identical and religiously motivated hatreds were brimming under the surface. Russia was the last absolute monarchy in Europe and had the largest Jewish population, which amounted to 5% of the Russian Empire equating to 1/3 of the Jews in the world. These 5 million people lived in the Pale of Jewish settlement, which was a group of provinces extending from the Baltic to the Black Sea, and encompassing much of what is now Poland. In 1865, under the regime of Alexander II, the Czar had allowed Jewish artisans to locate outside of the Pale, the government also encouraged the education of Jewish youth into the learned professions, graduates of which were also allowed the same freedoms. These measures opened up new centres of Jewish industry and prosperity. With the death of Alexander II, the situation soon decayed, culminating in the anti-Jewish riots of 1881. This led to the head of the Ministry of the Interior, General Ignatieff, to issue the infamous 'May Laws' on 3rd May 1881 which included restrictions on the ways Jewish people could conduct business and where they could settle. The young Morris Light therefore left Russia at an opportune time.

During the period from 1879 to 1884, he moved to Scotland and operated a draper's business in Glasgow. He later emigrated to New South Wales, Australia in 1884 landing in Sydney with 200 pounds sterling in his pockets. From Sydney he travelled to Mittagong, then Moss Vale before coming to Newcastle in 1886. He settled in Carrington and operated a business selling household wares in a horse drawn cart. In 1887 he married Sarah Jacobs, a 32 year-old English woman, and the couple had four children, Hilda (1888), Bertram (1889), Myra (1892) and Reta, who was born on the 15th March 1898. During the opening years of the new century Morris Light opened his first furniture store in Cowper Street, and then moved to Hunter Street West where it became known as the 'House of Lights'. The enterprise expanded with a new emporium which was later built and a second store opened at Vincent Street Cessnock. His son, Bertram, was groomed to take over the management of the business which became M. Light & Son Ltd. 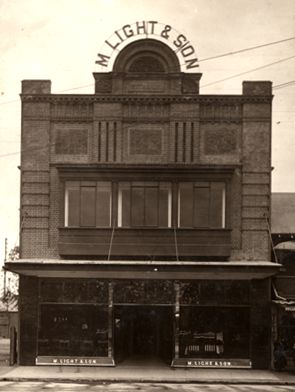 Morris Light was proud to acknowledge his successful achievement of the introduction of consumer credit to Newcastle, which offered finance to customers under his own interest free terms. The success of the system was reinforced by the claim that they had never found occasion to repossess any of their goods. His commitment and service to his local community was also a feature of his cumulative 35 years of public life as alderman for the Carrington and Newcastle Councils. He served two terms as Mayor of Carrington in 1902 and 1903, being credited as being a catalyst for the early electrical illumination of Carrington Streets.

On the evening of December 10th 1924, while a band outside the Council chambers played "For He's a Jolly Good Fellow", Morris Light was elected Mayor of Newcastle, an event that was not without controversy. For the outgoing Mayor, Alderman R.G. Kilgour, refused to invest the new Mayor with the robes of office. Apparently upset at not being able to secure a seventh year as Mayor, he resigned as a protest against what he termed the "deceit and intrigue" of his colleagues. Morris Light served as Mayor until December 10th 1925. His achievements included the electrification of the tram service, he was also an advocate of the electrification of the Newcastle to Sydney rail link, the creation of a children's park at Centennial Park, and he set in motion the construction of the city hall, offices, art gallery and museum.

He considered his greatest achievement the construction of a self-funded City hall and Civic Theatre complex, a task which involved a battle between Council and the illustrious coal baron Mr John Brown. Mayor Light wanted the coal baron to reliquish possession of the old Black Diamond Hotel site as a 'gift' to the people of Newcastle so as "to have a Town Hall befitting the prestige of the city". The coal baron didn't agree, and suggested they site the Town Hall at the congested eastern end of the City, as well as affirming that he would resist every move to resume the site proposed by Mayor Light.

As history would have it, Morris Light died of Pneumonia at 7.10 am on the 26th July 1929, aged 74 years. His funeral at Sandgate cemetery was attended by 300 people and involved a joint Jewish and Masonic ceremony. He never lived to see his dream of the City Hall and Civic Theatre finally completed. At the opening of the new Town Hall Alderman Wheeler gave credit to his predecessor for the new building, the lights outside bear a commemorative plaque to honour Morris Light's contribution. These buildings stand as treasures to the city of Newcastle and highlight the magnificent achievement that people of vision can have on a place.

To Reta, Morris and the Light Family, we send our warmest thanks for your magnificent contribution to this city and its University.

Cohn, Norman
Warrant for Genocide: The Myth of the Jewish World Conspiracy and the Protocols of the Elders of Zion. London: Eyre & Spottiswoode, 1967.

Ray, Greg.
Newspaper Articles "Behind the Family that gave $1.5m to University" and "Light Shines on University". The Newcastle Morning Herald, Monday May 17th 1993 pp. 1, 6.

Russo-Jewish Committee.
The Persecution of the Jews in Russia with Appendix containing a summary of Special and Restrictive Laws. Also a Map of Russia, showing the Pale of Jewish Settlement, A Letter reprinted from "The Times" of 5th November, 1890, A Report of the Guildhall Meeting Held on 10th December 1890 and the Text of the Memorial to the Czar With its accompanying Letter from the Lord Mayor. Issed by the Russo-Jewish Committee for Gratuitous Circulation. London: Wertheimer, Lea & Co., 1891.