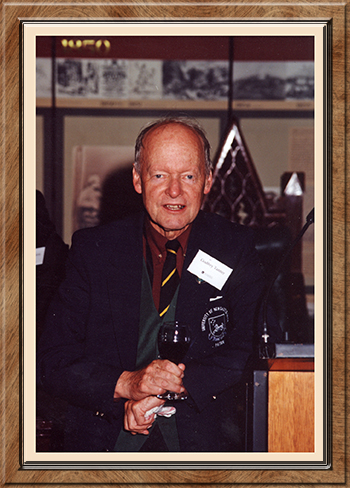 Research and Publications: Plato, Aristotle, Stoic Philosophy, Greek Tragedy, early Latin Verse, Roman Comedy, Seneca, Martial, Tacitus, and the Church Fathers. After retirement he continued with work on the Byzantine and Sanskrit areas concentrating on the Vedas, the Upanishads and Kalidasa.

When Godfrey Tanner came to Newcastle, he joined James Auchmuty and Brin Newton-John in the endeavour to create a traditional University here in the Hunter.

His commitment to student life was equally remarkable. He set up debating and Union Nights and helped organize the 1965 Universities Drama Festival. He was a member of the Union Board of Management (1975- 88), Trustee (1981-89) and Patron 1990 onwards. The new bar in the Shortland Union Building was affectionately named the Godfrey Tanner Bar in 1992 and he was awarded Life Membership of the Union.

He was Patron of the Engineering Fraternity and enjoyed close relationships with the Faculty of Engineering who later provided him with an office after official retirement.

His commitment to community life is reflected in his involvement in the Hill Residents’ Action Group, his membership of the Newcastle Club and his role with the Church as well as a variety of other activities. An active Anglican Churchman, he was for a number of years, between 1963 and 1988, a member of the Newcastle Diocesan Council and served on the General Synod Doctrine Commission for three years in the 1970’s.

He was honoured with the title of Professor Emeritus (1993) and Hon. Doctor of the University (1994). In 1996 he was awarded Distinguished Membership of Convocation and some months later was elected Deputy Warden of Convocation; a term he held for two consecutive years. From 1997 he was an ambassador of alumni development for the University, regularly attending events. In 1999, the Brisbane Alumni Committee established an Alumni Medal in his name. He hosted the inaugural Alumni Gathering at the Athenaeum Club in London in 2000.

Godfrey’s commitment to students and his discipline is reflected in the fact that he continued to teach Sanskrit and help students right up until his death on Wednesday July 10, 2002.