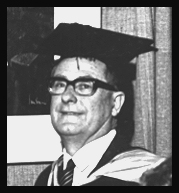 His early education was at Kurri, his secondary at East Maitland Boys' High School and tertiary at the University of Sydney where he pursued his love of English and his bent for Mathematics and Science.

Griff completed his professional training year at Sydney Teachers' College and was eventually appointed in 1935 to the N.S.W. Teaching Service at Newcastle Junior High School.

In 1940 he was triumphantly awarded his Master of Arts degree in mathematics, with First Class Honours, and the University Medal.

Griff had just been "run in" into teaching when, also in 1940, he joined the R.A.A.F. and remained there for five and a half years.

After discharge, he returned to teaching at Sydney Technical High School. Thence he was appointed to Balmain Teachers' College as a Lecturer in Mathematics, and part-time at the University of Sydney, before going to Wagga Teachers' College as Vice-Principal for two years.