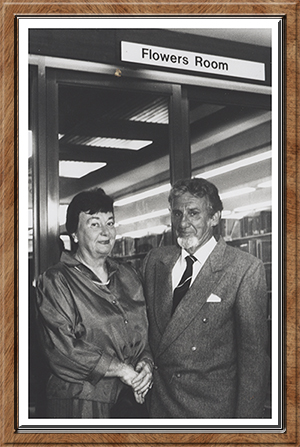 Pat and Ted Flowers at the opening of the Flowers Room

The University and Convocation honoured Pat and Ted Flowers at a gathering in the Auchmuty Library on March 5th, 1990.

In recognition of their contribution to the University, the Humanities Room was named the Flowers Room.

Mrs Flowers joined the staff of the Newcastle Technical College Library in 1943. She was Librarian-in-Charge from 1947 until 1960, when she resigned to have a family.

Mrs Flowers was associated with the former Newcastle Conservatorium of Music as Foundation Librarian for 13 years up to 1983.

She has always been happy to work for the University and is a keen worker for the Book Fairs.

Mr Flowers took up duty at the former Newcastle University College as Librarian in 1961. When the University became autonomous in 1965 his position was changed to University Librarian. He retired at the end of 1988.

Whilst at the University Ted also worked in South East Asia as library consultant for Australian Government development agencies and acted as advisor on library development and library education.

Mrs Flowers spoke at the ceremony of having, in 1951, been asked to take on the role of Librarian for the University College.

"My brief", she said, "was train library staff (some of whom are here today and are still connected with this library) and develop a good basic collection, primarily in science, technology and the humanities for conversion courses from the Diplomas of the Technical College to degrees of the (now) University of New South Wales".

She said Ted and she were very proud of their association with the University and its libraries. "I don't think either of us felt that it was ever just a job", she said.

Ted said he was glad the Humanities Room was chosen to be the Flowers Room.

"It has been my joy and my despair", he said, "initially accommodating the entire monograph collections and having had more than its fair share of physical problems".

"I do believe", Mr Flowers added, "that this University is the best thing that has ever happened to this region".