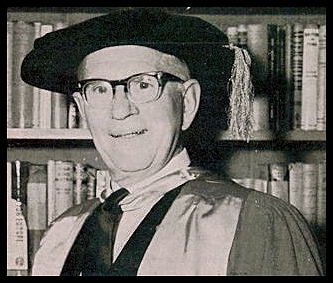 After serving in the First World War in Field Ambulance Units and subsequently in private industry [Dr Ralph Basden] had had a long and distinguished career in Technical Education when the New South Wales University of Technology decided at the end of 1951 to establish a University College and to make the Principal of that College also the first Warden of the new College. He was exactly the man to foster the cuckoo in the nest. Himself always a scientist with research interests as well as an administrator, his natural ease of manner smoothed over many a difficult situation as the aims, objects and ambitions of the two institutions forced into a joint existence in a confined area inevitably clashed. At least in the early days the two Colleges were both primarily technological but with the introduction of the Division of Arts in 1954 and the Division of Commerce in 1957 and their quick and disproportionate expansion, new stresses and strains became apparent which were again smoothed over by Ralph Basden's own personality which would give offence to no man.

By deliberate choice Ralph Basden made his career outside the Capital City of this State. Everywhere he served - in Newcastle for so many years, in Wollongong and in Broken Hill - he took a very active part in community activities but he never gave up his interest in geology, in Botany and in Chemistry, especially in the essential oils and sugars of native plants and so it was with no surprise that when he reached his official retiring age he was happy to continue his connection with the University College and later with the University which sprang from it, as an Honorary Research Fellow in our Department of Chemistry, where it would be fair to say he is at least as regular in attendance as any member of the academic staff and from which papers and contributions under his name regularly appear. The affection and respect in which he is held by our graduates is shown by his election and re-election as a representative of Convocation on the Council of the University.

(Reprinted from Conferring of Honorary Degrees and Opening of The Chemistry Building and The Science Lecture Friday, 5th September, 1969.)