The collection comprises the achievements of three generations of the Pender family as architects in Maitland, spanning 125 years from the 1860s to the 1980s.

Report on the arrival of the Pender Archive in 2000

The University of Newcastle's Archives, Rare Books & Special Collections Unit in the Auchmuty Library is pleased to announce the recent arrival of the long awaited Pender Archive. The Archive consists of 2,562 individual architectural projects and includes many original water colour drawings of private and public buildings across northern NSW. The collection comprises the achievements of three generations of the Pender family as architects in Maitland, spanning 125 years from the 1860s to the 1980s. The earliest drawing in the Archive dates from 1866, and is of a cottage probably designed by John Wiltshire Pender for a member of the family. This diverse collection represents the archive of the longest surviving architectural firm in the english speaking world, providing a unique and illuminating perspective on the socio-economic and cultural development of the local region. The ARBSC is proud and honoured to have been chosen custodian of this enormously significant and valuable historical resource.

According to Professor Barry Maitland's The Pender Index: A Guide to the Architectural Work of the Pender Practice of Maitland N.S.W., 1863-1988 (Faculty of Architecture, Building and Design, University of Newcastle 1999), the Pender practice was set up around the year 1863 by John Wiltshire Pender (1833-1917), who emigrated to New South Wales in 1855 with his immediate family from the villiage of Tobermory at the north end of the Isle of Mull, Scotland. His father, William Pender (1789-1876) was a carpenter/builder, as was his uncle John Pender (1800-1885). He had served his apprenticeship as carpenter and joiner at Inverness, 160km north-east of Mull, with Mr James Ross. After a brief sojourn on the Victorian goldfields he returned to his family and settled in Maitland in 1857. His uncle, John Pender, had emigrated in 1838 and had established a successful building firm in the area, for which John Wiltshire Pender worked as a superintendent and possible manager for a number of years before establishing his own practice. The earliest building he designed was the Morpeth School of Arts which was opened on 24th September 1863. Throughout his career he designed and built a number of significant public buildings, cottages and homesteads including Presbyterian manse, Tamworth (1883), St Luke's Anglican Church, Scone (1884), Sefton Cottage, West Maitland (1886), McMaster Cottage, Bundella (1885), Cintra for B.W. Levy, West Maitland (1878), and culminating in two White family homesteads, Saumarez (1888) and Belltrees (1905-1906). John Wiltshire Pender married Jane Baker and had twelve children.

The business later passed onto his his youngest son, Walter Harold Pender (1885-1943) who had become an architect and continued the practice. He designed and built cottages and houses, a series of motion picture theatres, war memorials, a wireless station and a number of large hotels. The third generation of the Pender practice was continued by his son, Ian Walter Pender (1923-1988). He had served in the RAAF during the war flying Lancasters with 622 Squadron, before completing his architectural studies at the University of Sydney under Professor Leslie Wilkinson in 1948. Ian married Winsome Mallaby in 1950 and continued the firm in Maitland, with an impressive series of fine houses, buildings such as Cheattle house, Muswellbrook (1957) and works and extensions to complexes including St John's Theological College at Morpeth (1954 - 1974), the C.A. Anglican Village, Booragul (1953 - 1970), and Beresfield Crematorium (1969 - 1988). He was also involved in much restoration and re-use work for heritage buildings. He died in October 1988 and was survived by his widow, Winsome Pender. Their son, Andrew Pender graduated as an architect and currently works in Sydney, continuing the Pender family's architectural heritage into its fourth generation. 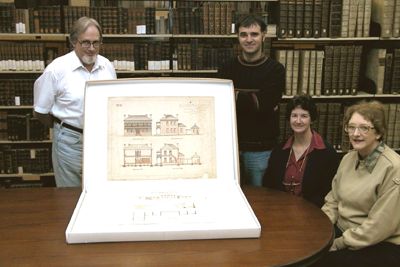 Our own Mrs Josie Stevenson has a Pender connection as her grandfather's signature appears on many of the drawings. James Warren Scobie (1863-1956) trained as an architect with J.W. Pender in Maitland NSW, hence his signature on drawings as a witness for the Pender practice. He practised as an architect in Maitland and on the North-West line in places such as Gunnedah and Narrabri. Examples of his work are the Maitland Town Hall and Neath Hotel. His practice was bought by Paul Thelander, who had Ross Deamer as a partner. She lives in the house he built in 1889 and lived in all his married life.

The collection arrived in early May 2000 and is currently undergoing conservation treatment which involves sealing the maps, plans and specifications for a period of six weeks. The process involves flushing the bags containing the plans to remove the prior atmosphere, and then pumping nitrogen gas inside. Small packets of iron oxide (i.e., rust) are placed in the bags to scavenge for oxygen. They are sealed with tablets which indicate the amount of oxygen present or absent.

To see many of the images, please see Living Histories @ UON.