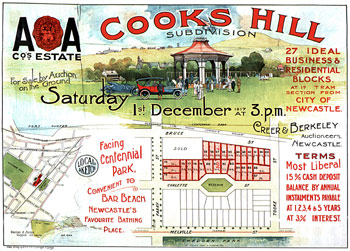 A5233 Family papers 1867 - 1975. 1 bundle.
Papers relating to the Winn, Coupland and Aird families, the business of Winns Ltd., and early history of Newcastle and Toronto.

A5747 Manufacture of railway rolling stock at Newcastle in the late nineteenth century [1979] 1 folder. Draft of University of Newcastle MA thesis.

A6050 (ix), A5386 Copies of conveyance of Stroud land for recreation purposes

A5238 Plan of part of Newcastle Harbour and section of profile of different strata sunk through the Hill, Newcastle showing coal pits. (Photographic copy of plan by Henderson in B5367)
Copy of map of estates of the A.A. Co., at Newcastle, 1854.

A5582 Dawson, the Australian Agricultural Company and the Manning River [History essay, 1978]

A5582 A closer look at the dismissal of Robert Dawson as agent of the Australian Agricultural Company, 1829. [History essay, 1977]

B7733-36, A5279-88 Correspondence, financial records and building specification.

A6723 Interesting facts in connection with the iron and steel works of the Broken Hill Proprietary Company Limited, Newcastle.

A8458(ix) Nine photographs of a parade at [May Day? Newcastle Sports Ground ?] ; Writing pad with notes including references to a voyage to England and Mr. Earsman ; List of Labor Movement Books from Goulds Book Arcade ; Paper: “The Quest for power” 4pp. ; “Women and Labour Conference” pp.79-117 [1975] ; Newcastle Herald, Friday October 1, 1999, BHP closure ; correspondence ; clippings ; Article: “Australians in Spain”, by A. Inglis ; Article on Anzacs, typed on reverse of the previous material,1975-1999.

B13409 'Stage Highway No. 23, Investigation' a report by BHP Central Research Laboratories and The University of Newcastle, Feb, 1984.

B10430 Proposed development of Aberdare East Colliery, Newcastle and plans, 1961.

A5823 Debts book of W.H. Smith & Co., compiled for sale of business, 1897
Papers relating to purchase of business at Denman, 1912, 1915
Leases for store at Moonan Flat, 1919
Papers concerning value of properties at Scone, Merriwa and Denman, 1916
Rates notices, 1922
Fire insurance policy on building at Aberdeen, 1913, 1928
Correspondence relating to extension to flour mill at Scone, 1898 - 1899
Papers relating to building of machinery warehouse at Muswellbrook, 1899

A5826 Printed material including:

A6540 Print to commemorate opening of Newcastle Picturegram Service, September, 1950.

A5745 (x) Journal, 1833. 1 folder
Transcript of Henry Dangar’s Journal during a survey of the two locations selected by Sir W.E. Parry for the Australian Agricultural Company at Liverpool Plains and Peel’s River, 1833 (Xerox copy).

A5582 The Northumberland Permanent Building, Investment, Land and Loan Society; its development and role in the creation of suburbia in Newcastle 1978.
2 photocopies. University of Newcastle History IIB essay.

The archive includes the subsidiary company Newcastle Glass Works (NGW) and was transferred to the University in July 2002. The company was established in 1931 and ceased operations in 2002. The archive consists of very comprehensive collection of minute books, company histories, photographs, historical documents and artefacts. The finding aid may be consulted here.

A5502 Prospectus of the Toronto Estate. c. 1890. 1 folder.
Xerox copies of the Prospectus, including copies of drawings, maps and plans.

An original of this Prospectus, entitled the Prospectus, Plans, views and particulars of the Toronto Estate, Lake Macquarie, for sale by the Excelsior Land Investment & Building Company & Bank Ltd, was purchased for Rare Books Q333.3099442 PLAN and can be viewed online.

A5582 (xiv) Background to Newcastle and its theatrical scene before the opening of the Victoria Theatre. 1 piece. University of Newcastle Drama IV thesis, 1979.

A6677 Memorandum and Articles of Association 1985
Minutes and correspondence, 1985

A6053 (ii) Draft entry on Horace Ireland for Australian Dictionary of Biography, 1982.

Reta Light was born on the 15th March 1898 in the family home at Cowper Street Carrington. She was the youngest daughter of Morris and Sarah Light. Morris Light was a well respected businessman and public figure, the founder of the furniture store known as the "House of Lights" and later M. Light & Son, as well as alderman on both the Carrington and Newcastle Councils, serving also as Mayor of Newcastle from 1924-25. Morris Light opened his first furniture store in Cowper Street, and then moved to Hunter Street West where it became known as the 'House of Lights'. The enterprise expanded with a new emporium which was later built and a second store opened at Vincent Street Cessnock. His son, Bertram, took over the management of the business which became M. Light & Son Ltd.

B9840 Minutes and evidence, 1847. 1 folder.
A report on developing economic competition on the Hunter River Coalfield
(Xerox copy donated by Dr. J.W. Turner).

A5231 Two sets of five pieces of “Store” tokens

B10052 Environmental impact assessment… of the Television Corporation development at Mosbri Crescent… by T.U.N.R.A., July, 1976.

A6470 Press clipping on a tunnel in the University of Newcastle grounds. The tunnel runs below a ridge which once carried the rail line of the coal company (The Post, January 8, 1986)

B10502-04 Applications and agreements to operate a commercial television station in the Newcastle Hunter River area, 1955.

B10505-10 Australian Broadcasting Control Board Television enquiry, Newcastle… 1959 - 1960 (6 volumes) [This television station did not proceed]

A5039 Press clippings, 1949 - 1958. 1 box.
Press clippings on the coal industry and tertiary education, and the formation of Newcastle University College.

A5704 (xiii) Short biography, 1979. 1 piece.
“Meet the master of the Lady Rowena”, Sydney Morning Herald, October 13, 1979 by Dennis Shanahan, on Captain Bourn Russell, veteran of the Napoleonic Wars, sea captain, whaler, trader, and politician. In 1835 Captain Russell established a store at Maitland and, in 1844, a boiling down works at Stoney Creek near Maitland.

A5455-56 Records 1855 - 1960. 2 boxes.
Legal records, legal and business correspondence, financial records, photographs and press clippings, including “How I look at it” as told by George J. Cohen. (Recollections)

THE VOICE OF THE NORTH Newspaper: