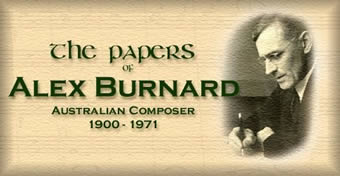 The collection of correspondence, papers, library and musical scores of Australian Composer Dr Alex Burnard were transferred to the Newcastle Conservation Alexander Burnard in the mid-sixties of Music on 20th December 1971, from the Elder Conservatorium of Music at the University of Adelaide. They were later sent to the University Archives, Rare Books and Special Collections Unit in 1998.

Also in the collection are some letters and postcards from Percy Grainger and his wife, Ella to Alexander and Phyllis Burnard.