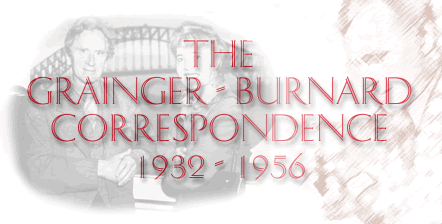 Percy Grainger (1882 - 1961) was one of Australia's most exotic and interesting musical figures. An excellent concert pianist, composer, collector of English folk songs, a purveyor of all things creative and imaginative in the sphere of modern life and music, and an inventor of the free music machine. He was a man far ahead of his time. His circle consisted of a number of significant Scandinavian and English composers such as Edvard Grieg, Delius and the esotericist Cyril Scott.

Percy Grainger was born on the 8th July 1882 at Brighton, Victoria and spent his early period in Australia. He moved to London with his mother and lived there from 1901 to 1914. He then moved to America, became an American citizen, and lived there for the rest of his life. In 1928 he married a Swedish artist Ella Strom. He developed a friendship with the South Australian composer Alexander Burnard (1900 - 1971) and his wife Phyllis, visiting them when he and his wife were in the country.